Not all VR video experiences are created alike. When we ask our clients if they need stereoscopic or monoscopic 360 video, we’re often met with blank stares or silence on the other end of the line. This isn’t a surprise given the rapidly changing technology and the new advancements we read about almost every week. It’s hard to keep up!

When YouTube launched 360 video support in early 2015, they brought this new immersive video medium to the masses for the first time. Since then, new formats and flavors of 360 video have been implemented such as 3D stereoscopic 360 and VR180. Facebook and other platforms have also jumped on board to support these new formats as well.

We know it can be difficult to wrap your head around how these formats work and decide which one might be the best for your project, especially if you haven't seen a concise comparison in a headset. To help inform these decisions, we’ve created the following simple guide.

Mono 360 video was the first and is the most prominently used format for immersive video today. A mono 360 video is usually a 2:1 aspect ratio equirectangular video container, common resolutions include 3840x1920, 4096x2048, 5760x2880, and 7680x3840. Think of equirectangular like a world map from a globe, unwrapped and flattened. 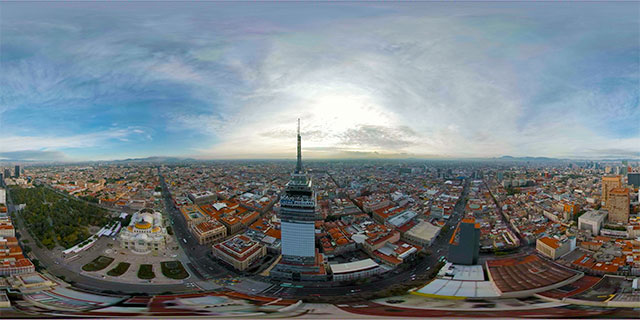 When we say mono, we mean the video is a single channel, but it does actually display to both eyes in the VR headset. A stereo 360 video has 2 channels, with slightly different perspective to give you the perception of depth, like a 3D film in the theater. We’ll get more into that below.

Although many 360 videos are a minimum of 4K, content can often still look very blurry. I’ll explain why. When viewing 360 video content, the viewer is only seeing a small slice of the 360 footage at a given time within their field of view. This means that a 3840x1920 360 video is actually only displaying about 1280x720 in the viewing portal at a given time. This is why VR video content sometimes looks like television from the 1990s.  For this reason, every pixel counts!

Stereo 3D 360 video is mainly different because it contains 2 video channels within the same video container, for the left and right eye. Each view has a slightly different perspective, giving the viewer a sense of depth of field, and separating objects from foreground to background.

Stereo formats for 360 video platforms are typically side by side, or top/bottom, containing that identical video content from a slightly different perspective within the same video file. Specialized cameras are used to capture both perspectives at the same time. These cameras typically cost more and can be more time consuming to work with in post.

This animated example shows the perspective shift per each eye, which creates the sense of depth in a 3D stereoscopic video.

Because both channels are stored in the same video container, this means that essentially your resolution is cut in half to the end viewer. To compensate for this, stereo 360 videos should be delivered at double the resolution of mono, which can be challenging for most streaming platforms and hardware. Common stereo resolutions may include 3840x3840, 5120x5120 and even 7680x7680. For lower end hardware, it’s typically delivered in 3840x2160 resolution and both “stretched” stereo channels are crammed into this container, but at this resolution we lose a tremendous amount of detail. 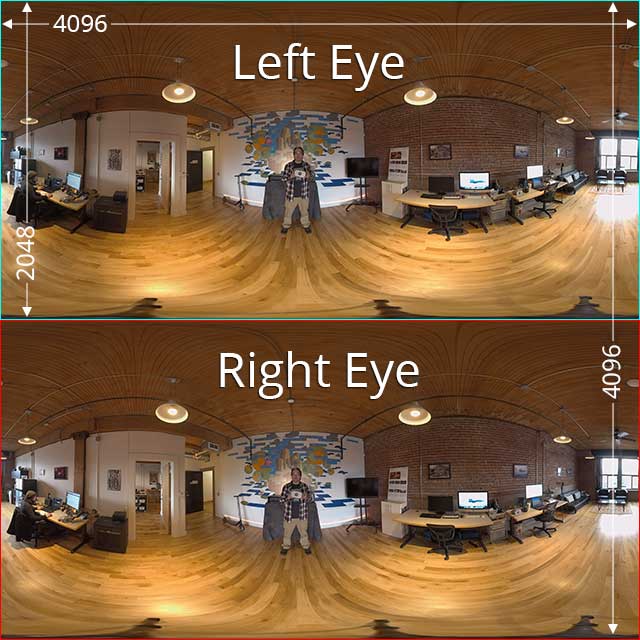 In this example frame, we see 2 independent stacked videos per each eye in the video container, for a 3D 360 video at 4096x4096 resolution.

But how does anyone play a 7680x7680 video file on any device? Thankfully, companies like Pixvana and Visbit have developed what we call viewport biased 360 players. These platforms are specifically designed to display only the pixels in your field of view at the highest resolution, while conserving bandwidth and processing power by showing the pixels you aren’t seeing in lower resolution. When you move your head, the resolution will seamlessly adapt. Pretty cool, huh? Unfortunately, this type of technology is not implemented in quite the same way on mainstream platforms like YouTube and Facebook.

It’s also important to note that in order for viewers to decipher the 3D, they need to be viewing in a headset or wearing 3D glasses. If they view the content on a normal screen, it will appear just like any basic monoscopic 360 video.

Very recently, popular video platforms like YouTube and Facebook have begun to support VR video content in 180 degrees. VR180 is a video file containing 2 channels of video for the left and right eye, but for only the front facing 180 degree field of view. 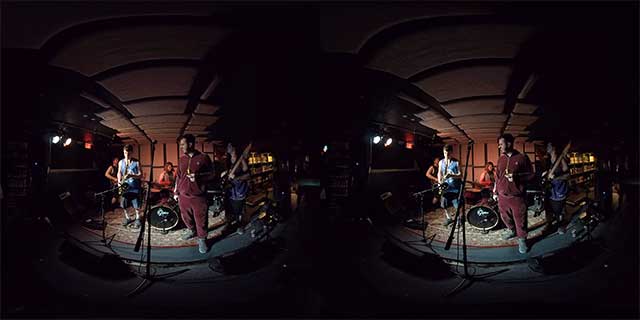 This format is generally best for content where the subject matter remains in front of the viewer. It’s not as immersive as a full 360 experience, but it does give a sense of presence considering that you have the freedom to look around as you move your head. Currently, VR in 180 is most commonly used for adult content, but it’s becoming a more popular medium for mainstream storytelling as well.

VR180 can be beneficial considering the bandwidth and file size concerns we mentioned about stereoscopic 360. Because you aren’t wasting bandwidth or processing power to show the pixels behind the viewer, you can cram more detail and pixels into a VR180 project. 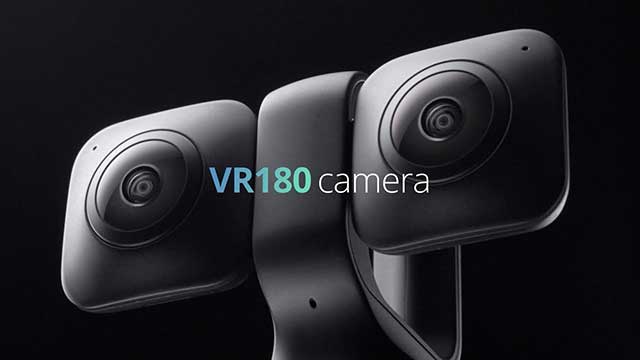 The cameras for VR180 are also becoming more commonplace and very affordable. These cameras are very similar in design to those used to make traditional 3D films, with 2 lenses side by side, but at very wide angles. The quality of these cameras can range from the cheapest consumer models for only a few hundred bucks, to pairs of $10,000 cinema cameras. As with anything, you get what you pay for.

So what format should you choose?

Ultimately, it depends on the project requirements. It’s a common misconception that one may be better than the other. Just like with traditional films, this is a creative decision as much as it is technical.

Stereoscopic 360 content requires careful consideration and is best implemented for projects where you have 100% control over your set and actors. Stereo really shines where the depth can actually be appreciated. Objects or actors who are too far away won’t appear to be 3D at all. You also need to be sure to position your talent between stereo pairs of lenses, which gives you the optimal effect of depth. Stereo dead zones, or areas where the overlap between perspectives is not ideal, can cause eye strain and discomfort as viewers try to focus on the content. Moving the camera can also be very unforgiving in stereo 3D, any stitching anomalies as a result of this can cause motion sickness and eye strain. 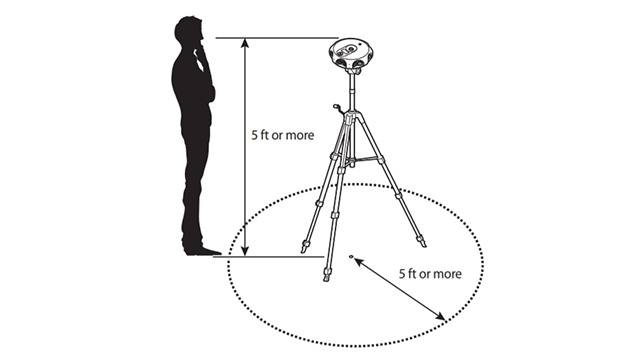 Stereo 360 Cameras like the Samsung 360 Round recommend a minimum 5 foot distance from subject to camera.

If budget is a concern, it’s also important to keep in mind that stereoscopic 360 production can be more costly. The cameras are more expensive and have higher day rates, the production crew may need to spend more time on location to ensure that 3D shots turn out perfect, and live monitoring solutions may be needed to make sure that actors hit their marks. In post production, since you are dealing with 2 video channels, you are essentially doubling the work. Logos, titles, and text also need to be properly setup for 3D display, which takes more time as well.

VR180 simplifies the stereoscopic workflow by a great deal, but at the cost of not having a fully immersive 360 scene. Since there’s no actual “stitching” involved in post, but rather just positioning and calibration, this can save a massive amount of time and budget. 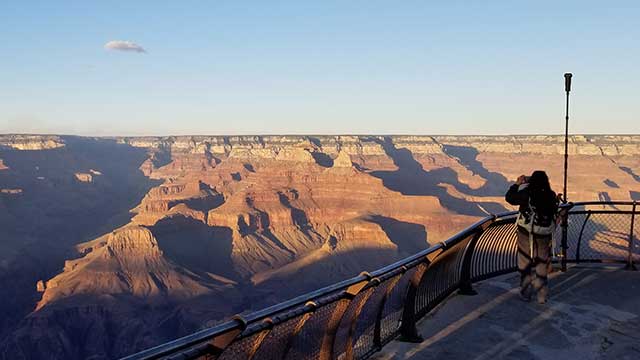 Shooting in mono can be a better choice for chaotic environments such as live events, journalism, reality, documentary, extreme sports and other settings where you don’t know exactly where the action will be. Landscapes, nature scenes and wide open shots may also be better in mono because the stereo has no effect beyond around 20 feet. And since you aren’t splitting your pixels in half to display 2 channels in the same container, these scenes will also look sharper and higher resolution in mono. Moving the camera can be more forgiving than with stereo, since it can be easy to produce a seamless stitch. It’s also hard to decipher 3D depth in moving shots anyway, so in some cases, stereo can be a waste with action packed content.

You might ask, why not just shoot in stereo and turn that into mono later? This makes sense because you always have the option of delivering in stereo if it works out, but there’s also a tradeoff to consider. Stereoscopic 360 video cameras are generally larger and have more parallax distance between lenses. This actually makes it more difficult to get a good stitch in monoscopic. For this reason, if a project is intended to be distributed in mono, it’s generally best to shoot it that way to begin with.

Game engine experiences are inherently easier to produce in 6DoF, given the fact that they are 3D generated worlds. However, there are experiments in 6DoF 360 photography and video today. The idea of having a truly photo-realistic 6DoF experience in VR is pretty phenomenal, when we can perfect this, it’s like having the holodeck from Star Trek.

But don’t get too excited, it’s still a long way away from mainstream. Photo-realistic 6DoF experiences are very hardware intensive and the capture technology today is just not that practical for most projects. They’re also very limited in just how far you can move, without a massive amount of pixel data from every angle, objects tend to break up and look warped. The majority of these types of experiences today only exist as tech demos. One great example you can check out is Google’s “welcome to lightfields,” you can read more about it in their blog. You can also read more about the above example of 6DoF video by reading about Facebook's recent partership with RED on RED Manifold.

So there you have it, that’s the low-down on popular VR video formats today. But the easiest way to tell the difference is by seeing it yourself. The following examples were shot in our office, in monoscopic 360, stereoscopic 360 and VR180. Keep in mind, you’ll need a headset like a Google Cardboard or Oculus Go to see in 3D. Best viewed in the YouTube VR app (Android, Oculus).

I hope this post has at least shed a little bit of light on the pros and cons of each option. I can’t really stress enough that it really depends on the content and the story that you want to tell. Of course, if you have questions, we’re always ready to help out.